Cabal Contacts, also known as Cabal Agents or Cabal Sympathisers were Humans who aided the Vampire resistance (the Cabal ) against the Sarafan in Blood Omen 2 .

The Sarafan rule of Nosgoth, despite the advancements in technology and near elimination of the Vampires, was not welcomed by all humans, who despised the Sarafan rules, taxes and creulty.[1][2] Covertly many humans took to aiding (occasionally unintentionally) the Cabal.

Cabal Contacts were used frequently in Blood Omen 2, particularly throughout the early levels; as Umah sought to direct Kain to Sanctuary, without giving the location away. The Cabal contacts were rarely named and did not have unique character models. Nevertheless, several (presumably individual) characters were seen, these are listed below:

The Slums Contact (CH1)(referred to as "Dimitri" in some sources[3]): Met by Kain outside the Grand Hotel in the Slums,[4] this contact referred to the Sarafan's actions as "Not Right, Not Natural",[1] he was apparently promised the 'Dark Gift' by Umah.[5] This contact aided Kain in finding the Smuggler's Den,[6] but was murdered by Faustus shortly afterward.

The Den Contact (CH2): Met Kain at the staircase in the T&A Tavern in the Smuggler's Den.[7] He Told Kain the location of the nearby Smuggler's Tunnel and warned him of the Thieves present there.[8] Presumably fled with the Sarafan guards 'entering' the Tavern.(Though he could be killed by Kain or a nearby Thug )

The Tapster (CH3): The Barkeeper of the Red Raven Pub in the Lower City.[9] She was not formally a member of the Cabal, but was persuaded by "the night itself" (probably a Vampire using Mist or a similarly 'stealthy' Dark Gift) to deliver information to Kain. She was able to tell Kain how to get passed gatekeeper Duncan and advised him to talk to the newspaper vendor near the warehouse.[10]

The Vendor (CH3 ): A vendor with a small news-stand near to one of the warehouses in the Lower City . He advised Kain to seek the Blue Lady Curios shop in the eastern part of the district, which housed Sanctuary . He also advised Kain to avoid using the main streets and instead use back alleys, rooftops and sewers; to this end he gave Kain the password to get passed a gatekeeper in a nearby alley.[11]

The Bishop's Butler (CH4): The Bishop of Meridian's servant, he was not formally a member of the Cabal but was likely aware of his Masters activities; he told Kain that the Bishop had fled to the Cathedral after Kain revealed he worked for the Cabal. The Butler could be killed by Kain.[12]

The Noblewoman (CH5): Addressed by Kain as "Madam", met Kain in the Sarafan Keep and refused to open a Ward Gate until Kain had disposed of Nobleman Artemis, her comments suggested that Artemis' death may have been a personal grudge rather than a job for the Cabal . The Noblewoman disappeared shortly after her task had been completed.[13]

The Cabal Contact Dimitri in The Slums, outside the Grand Hotel 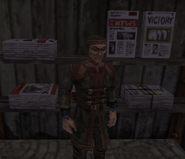