Barmaids, also known by their debug title "bmad", were a Human NPC class encountered in Blood Omen 2. They were incredibly rare and could be seen on only two occasions throughout the game.

Kain could first encounter the Barmaid NPC class in Chapter 3: The Lower City. After passing through the Ducket's Traders Warehouse and the sewers, Kain could re-emerge on the 'Main Street' on a square with a prominent guillotine and the 'Play House' (presumably a theatre). Nearby a small shop with a glass frontage and a curious "npoekt" sign could be entered and it was shown to contain the first of these NPC's, standing behind a bar[Blood Omen 2].

The Barmaid class would not be seen again until Chapter 10:the The Wharves. After encountering the Gunship along the waterfront, Kain was able to enter a small tavern (marked with a 'goblin' face with an ale tankard). Inside the tavern, Kain could find the second and final Barmaid behind the bar, along with two industrial workers[Blood Omen 2]. 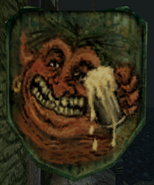