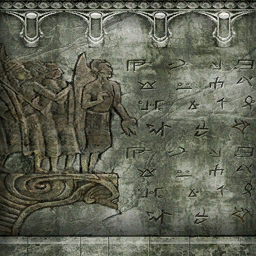 Arcane symbols were an un-deciphered symbol-based 'language' featured throughout the Legacy of Kain series. The symbols were featured in a variety of locations, notably they were seen on Pillars platform, in many Forges, alongside Time streaming chambers and even in Kain's magic energy meter .

"The runes were mostly decorative. We took some things out of the Blood Omen script, Ancient writings, etc. There was one funny story where Jake Wendler put his name on an obelisk as 'Wendler's Monument' using Futhark. We were laughing about it, when Amy [Hennig] walks up behind us, takes one look and says 'Wendlor's Monument?! [sic] Very funny guys'
Jake and I looked at each other... "YOU can read Futhark?! WTF?!" Have I mentioned that Amy is a very, very sharp cookie?
Anyway, that particular set of symbols was decorative."
―Daniel Cabuco

Retrieved from "https://legacyofkain.fandom.com/wiki/Arcane_symbols?oldid=186676"
Community content is available under CC-BY-SA unless otherwise noted.